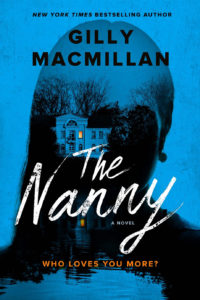 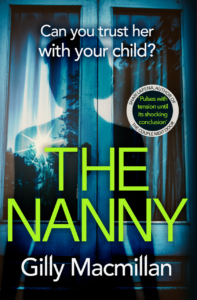 When her beloved nanny, Hannah, left without a trace in the summer of 1988, seven-year-old Jocelyn Holt was devastated. Haunted by the loss, Jo grew up bitter and distant, and eventually left her parents and Lake Hall, their faded aristocratic home, behind.

Thirty years later, Jo returns to the house and is forced to confront her troubled relationship with her mother. But when human remains are accidentally uncovered in a lake on the estate, Jo begins to question everything she thought she knew.

Then an unexpected visitor knocks on the door and Jo’s world is destroyed again. Desperate to piece together the gaping holes in her memory, Jo must uncover who her nanny really was, why she left, and if she can trust her own mother…

In this compulsively readable tale of secrets, lies, and deception, Gilly Macmillan explores the darkest impulses and desires of the human heart. Diabolically clever, The Nanny reminds us that sometimes the truth hurts so much you’d rather hear the lie.

[A] devastating psychological thriller. Macmillan expertly ratchets up the tension as long-held secrets come to light. Readers will have a tough time putting this one down.

Classism, fragile memories and a family torn apart by misunderstandings and jealousy haunt an aristocratic British family in “The Nanny,” Gilly Macmillan’s enthralling fifth novel. Sophisticated plotting and believable characters elevate “The Nanny” as a solid family drama... the real strength of “The Nanny” is the mother-daughter relationship and how feelings can be manipulated... Macmillan wisely doles out clues leading to a surprising finale in the character-driven “The Nanny”.

The Nanny kept me in white-knuckled suspense until the very last page. Gilly Macmillan's breakout thriller is a dark and twisted version of Downton Abbey gone very, very wrong.

Gilly Macmillan is a master of creating tension so exquisitely unbearable I had to force myself not to skip ahead. Brilliant, gripping, and terrifying.

Thriller junkies will race through The Nanny. A brilliant blend of missing-person drama with some seriously spooky Gothic overtones.

With its buried secrets, shifting allegiances, and creeping sense of dread, The Nanny pulses with tension until its shocking conclusion. I absolutely loved it!

The Nanny by Gilly Macmillan is a chilling, heartbreaking, beautifully-layered suspense novel. It's sharply observed, with jolts that knock you off your feet and characters who never fail to surprise.

Exploding with secrets, The Nanny by master storyteller Gilly Macmillan has everything you dream for in a thriller: expertly drawn and complex characters, a terrifying premise and the best villain I've encountered on the page in a long time...Macmillan skilfully reveals long dormant family secrets in this atmospheric stunner...you won't be able to rest until the final, spine-tingling conclusion.

Heather Gudenkauf, New York Times bestselling author of The Weight Of Silence and Before She Was Found

Secrets, lies, jealousy and betrayal… Elegantly structured and infused with a creeping sense of dread.

I was blown away by The Nanny. Original, twisty, unpredictable and taut with its buried secrets, the old creepy house and complex relationships. I never knew who to trust and the ending shocked me. This deserves to be huge!

The Nanny will make you doubt everyone - including yourself. Some families are built on a bedrock of lies. This one is no exception. Clever and deliciously addictive.

A tense, assured and atmospheric thriller which will keep you guessing from page one right through to the shocking denouement. Brilliantly absorbing.

Mel McGrath, USA Today bestselling author of Give Me The Child

From the first page I wanted to know all the dark secrets this family were hiding. It’s a seriously addictive read and I never knew who to trust.

The plot sucked me in and the insidious build had me turning the pages rapidly.

It’s the characters and locations that make this dark novel so slippery and claustrophobic...as a psychological thriller, The Nanny is troubling, and the perfect read to pack for the summer.

The Nanny is one of my favourite books of the year so far. A fast paced thriller with dazzling characters and enough twists and turns to leave you guessing. Five stars.

The Nanny is a fantastic read for fans of thrillers and suspense novels with a twist...the perfect mystery.

Lifelong secrets and unanswered questions spill out all over the pages of this beautifully written account of guilt, betrayal and motherhood.

[The Nanny] will have you staying up all night in order to get to the stunning, unforgettable conclusion.

The Nanny by Gilly Macmillan is a twisty-turny exploration of mother-daughter relationships... Secrets. Lies. Coverups. Murder. This novel has all of it. Macmillan does it a superb job of creating questions in the reader, then answering those questions, only to create more questions. Just when you think you’ve got it figured out, there’s a new wrench in the plan, a new point of view to consider, a new clue that will lead the reader somewhere else.