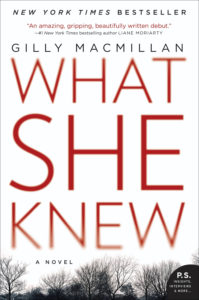 Rachel Jenner is walking in a Bristol park with her eight-year-old son, Ben, when he asks if he can run ahead. It’s an ordinary request on an ordinary Sunday afternoon, and Rachel has no reason to worry—until Ben vanishes.

Police are called, search parties go out, and Rachel, already insecure after her recent divorce, feels herself coming undone.

As hours and then days pass without a sign of Ben, everyone who knew him is called into question, from Rachel’s newly married ex-husband to her mother-of-the-year sister. Inevitably, media attention focuses on Rachel too, and the public’s attitude toward her begins to shift from sympathy to suspicion.

As she desperately pieces together the threadbare clues, Rachel realizes that nothing is quite as she imagined it to be, not even her own judgment. And the greatest dangers may lie not in the anonymous strangers of every parent’s nightmares, but behind the familiar smiles of those she trusts the most.

Where is Ben? The clock is ticking…

WHAT SHE KNEW was previously published in some territories as BURNT PAPER SKY.

Read an extract from WHAT SHE KNEW

Gilly Macmillan introduces some smart variations on the [missing child] theme in her debut mystery...Macmillan enlivens the narrative with emails, newspaper headlines, passages from professional journals, even transcripts from Inspector Clemo’s sessions with a psychotherapist. But her best move is to include vicious blog posts that go viral.

Haunting first novel…readers will have a tough time putting this one down.

What an amazing, gripping, beautifully written debut. What She Knew kept me up late into the night (and scared the life out of me).

One of the brightest debuts I have read this year – a visceral, emotionally charged story…heart-wrenchingly well told and expertly constructed, this deserves to stay on the bestseller list until Christmas.

Heart-in-the-mouth excitement from the start of this electrifyingly good debut… an absolute firecracker of a thriller that convinces and captivates from the word go. A must read.

Macmillan’s magnificent debut delves into the emotional destruction wrought by Ben’s disappearance. No one is unaffected, and she draws out every inch of trauma suffered by all as they search for the boy. It’s a tour de force as the reader discovers on each page.

Taut pacing…this is an engaging debut.

Taut, emotional and packed with suspense, it kept me glued to the pages.

A real page turner… [a] heart breaking story… if you loved Gone Girl and Before I Go To Sleep you need to read this.

Tightly focused and fast-paced. You won’t rest until you really know what happened.

Lisa Ballantyne, author of The Guilty One

Every parent’s nightmare, handled with intelligence and sensitivity, the novel is also deceptively clever.
I found myself racing through to find out what happened.

Burnt Paper Sky is that rare thing in reading - a book which hooks you and keeps you focused on it until the end.

This accomplished, intelligent debut should come with a warning - it's completely addictive. A nail-biting, sleep-depriving, brilliant read.

Saskia Sarginson, author of The Twins

Deft, tense and utterly gripping, Burnt Paper Sky stays with you long after the final page has been turned.

This pacy, emotional and expertly characterised novel's sure to follow in the footsteps of fellow thrillers such as The Girl On The Train and Gone Girl by soaring to the top of the bestseller charts.

A distinctly contemporary twist on Salem circa 1692 . . . A pacy, twisty thriller.

A powerful page-turner and damning commentary on this age of the internet, where everyone has an opinion and a forum in which they can voice it.

What an exciting debut! Burnt Paper Sky kept me up until the small hours, from the nightmarish moment when a mother first realises that her son has disappeared, to the dramatic denouement. Gilly Macmillan's voice is innovative and confident, and she creates a cast of very human characters. There's a page-turning urgency, combined with an insightful exploration of the emotional fall-out after the abduction of a small child. Meanwhile the media and internet community are shadowy figures whose pitiless speculation and harassment seem all too believable. Burnt Paper Sky is written with passion and insight. Bravo, Gilly Macmillan.

Charity Norman - author of After The Fall